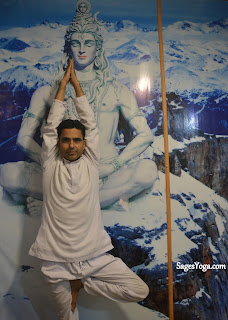 Yoga, today, is the fastest-growing practice worldwide. But how much do we know about the origin of Yoga? Not very much, I guess. So let us just get the basic knowledge about it in this article.

The word 'Yoga' is first mentioned in the Rigveda. The Rigveda, however, does not describe yoga, and there is little evidence as to what the practices were. Earliest references to practices that later became part of Yoga are made in 'Brihadaranyaka Upanishad', the earliest Hindu Upanishad. For example, the practice of 'Pranayama' (consciously regulating breath) is mentioned in hymn 1.5.23 of Brihadaranyaka Upanishad (c. 900 BCE) , and the practice of 'Pratyahara' (concentrating all of one's senses on self) is mentioned in hymn 8.15 of 'Chandogya Upanishad' (c. 800–700 BCE).

The first known appearance of the word 'Yoga', with the same meaning as the modern term, is in the 'Katha Upanishad', probably composed between the 5th and 3rd century BCE, where it is defined as the steady control of the senses, which along with cessation of mental activity, leading to a supreme state (Moksha).
The Bhagavad Gita apart from traditional paths of Yoga, gave three new principles namely Bhakti Yoga (devotion), Karma Yoga (performing all duties with righteousness) and Jnana Yoga(to achieve supreme knowledge).
Thus, there are multiple spiritual paths mentioned in Hinduism through which one can achieve 'Moksha' (liberation).

According to yogic lore Lord Shiva, is considered to be the Adiyogi or the first yogi.
Yogis believed that Shiva reached a supreme state where there was nothing but blissful neutrality towards the worldly matters. He used to dance on mountains in bliss and meditate for long durations.

Over time, various sages interpreted yoga in different ways, although the goal always remained the same, that is, Moksha/Mukti (liberation).

Yoga was quite popular earlier. But due to foreign invasions on India around 1000 CE, and foreign rule, later on, Yoga was banned. Sages, however, kept taking steps to preserve Yoga.
Yoga couldn't achieve the popularity it deserved until the late 19th and early 20th century. With efforts of likes of Swami Vivekananda who himself was an 'awakened-yogi', Yoga reached west and took a form which is called 'Modern Yoga'.
There are different forms of Yoga (Hatha Yoga, Laya Yoga, Mantra Yoga, etc); Hatha Yoga being followed most.
Hatha Yoga primarily consists of yogic postures (asanas) accompanied by Pranayama, Meditation etc. It focuses more on physical health.
Whereas, Patanjali's Yoga Sutras (appeared around 400 CE) are more inclined towards spiritual awakening with little or no focus on asanas. Sage Patanjali's Yoga Sutras is a collection of principles mentioned in different earlier yoga-scriptures and traditions. 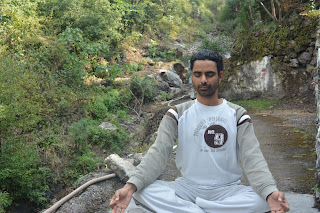 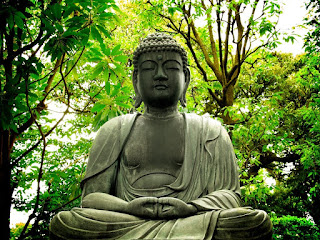 Buddha doing Meditation (Dhyana) Meditation (Dhyana) - An extreme level of Yoga After having successfully mastered all the preparatory cleansing, 'asanas' and 'pranayama'; one is ready for 'proper meditation'. The 'Hatha Yoga Pradipika' text dedicates almost a third of its verses to meditation. Similarly, other major texts of Hatha yoga such as 'Shiva Samhita' and 'Gheranda Samhita' also discuss meditation.  The ultimate goal of meditation is attaining liberation('moksha'). This is achieved, through the awakening of 'Kundalini' (or seven-chakras of divine energy) that are present in the human body. 'Kundalini', is a form of divine energy (or 'shakti') supposedly located at the base of the spine ('Muladhara'). The term along with practices associated with it was adopted into Hatha yoga in the 11th century and other forms of Hinduism, as well as modern spirituality and new age
Read more

Hatha Yoga - Traditional form of Yoga Surya Namaskar 'Hatha' in Sanskrit means 'force/persistence' and thus alludes to a system of persistent physical techniques(or mental techniques) Hatha Yoga is said to be popularized by Yogi Matsyendranath, who also laid the foundation of 'Natha Sampradaya'(Natha Sect). Matsyendranatha, also known as 'Macchindranath' or 'Minanath' is said to be born around the 10th century CE around Bengal(although there are diverse opinions about his place of birth). He is revered in both, Hinduism and Buddhism and is sometimes regarded as an incarnation of 'Avalokiteswara' (a Bodhisattva) in Buddhism. There are many legends about Matsyendranath; most popular being the one which says, "Matsyendranath was born under inauspicious stars. This warranted his parents to throw the baby into the ocean. It was there that the baby was swallowed by a fish. The fish swam to the bottom of the ocean where Shiva wa
Read more